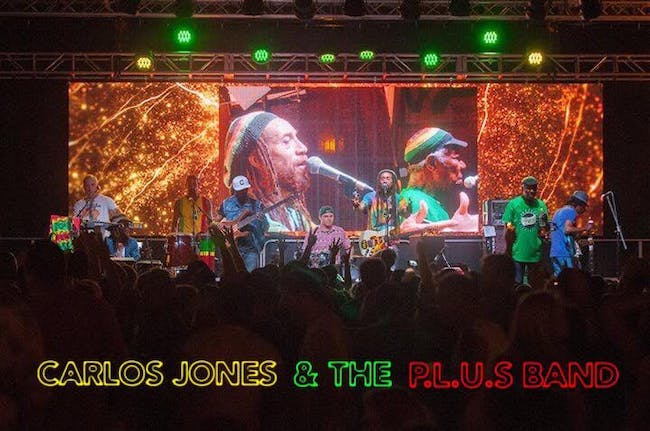 Carlos Jones and the P.L.U.S. Band

The “iron-man” of the reggae scene in Cleveland, Ohio is without question, Carlos Jones. Carlos’ journey is a history of Cleveland reggae itself. He started out as a sideman (percussion/vocals) with the band, I-Tal in the late 70’s, then went on to be the front man for the rock/reggae group, First Light for 14 years. Now Carlos fronts the Peace Love Unity Syndicate, aka The PLUS Band, focusing on rootsier sounds and uplifting positive messages.

In April of 2004, the band’s first full length CD, Roots With Culture was released after much anticipation and it did not disappoint. Described in The Beat magazine as “a powerful, 14-track collection of slinky grooves and thundering bass lines, Roots With Culture delivers a message of peace and harmony, with Jones’ heartfelt vocals leading the way, all wrapped in a production that can stand up to the best of them.” “It will undoubtedly, over time, become a staple in most reggae collections.” (Chuck Foster - Reggae Update, The Beat Magazine – Vol. 24, no.1, June 2005)

Since their humble beginnings in 1995, Carlos, and his Peace, Love, Unity Syndicate (the PLUS Band) have matured as songwriters, musicians and performers, giving energetic and uplifting performances for an ever-expanding following, which spans generations. They have been voted “best of” in their category every year in the Scene and Free Times Music Awards, including being voted Best Live Act (overall) in Cleveland at the 2004 Scene Music Awards. And in 2007 The group was awarded permanent "All Star" status in the Free Times Music Awards, thus basically “retiring their number”. The PLUS Band maintains a hectic pace of gigging out at clubs, private events and festivals - playing 3-4 shows nearly every week. As a result, the band's soulful rhythms and heartfelt message have made it one of Cleveland's top draws for more than a decade.

The band just released its second full length CD, Leave A Trail last year, and some of Carlos’ music is also featured on the soundtrack of a film which recently premiered at The Sundance Film Festival called North Starr. When asked about his plans for the future, he’ll simply tell you, “The future is right now. I just want to keep on playing this music from my heart for as long as I’m able to, and keep the positive vibration flowing for all those who can dig it, ya know? As long as I can continue to do what I love, what more could I want out of life?”