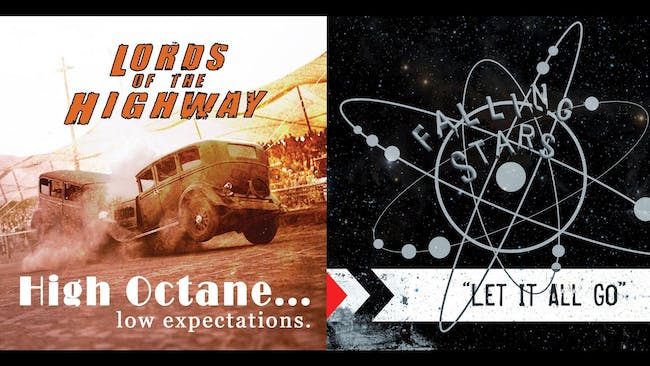 Lords Of The Highway

Falling Stars, Lords of the Highway and Lost State of Franklin

The local rockabilly band Lords of the Highway got its start in the early '90s when a local drummer placed an ad in Scene. He wanted to play some roots rock and singer-guitarist Dennis Bell responded to the ad. "We started jamming, and that didn't work out so well, but we still played a few gigs," says Bell. "After that, the drummer guy didn't want to play, so we got another drummer," says Bell. "It was kind of rockabilly back then, and it's morphed into more rock than 'billy' now."

"Dirty Girl," a track from last year's High Octane/Low Expectations, features a psychobilly vibe, thrives on howling vocals and brittle guitar riffs. Right before recording the album, the group went through a lineup change and brought a new bassist into the studio for the album. -- Jeff Niesel, Cleveland Scene

Falling Stars have dialed up the power pop for their Summer 2019 EP – LET IT ALL GO. The EP is a guitar-fueled affair with songs that celebrate defying the odds, running wild and standing strong.

Falling Stars journeyed through driving snows this January to Youngtown’s Peppermint Studio with Gary Rhamy on the dials. The three-day session yielded the near classic rock “We are the Future”, the beat-heavy “Neptune Baby” and the unabashed pop-rocker “Let It All Go”. A fourth track was added later in the spring with Don Dixon producing the acoustic driven rocker “Downstream.”

Stranded in the Future is the debut album by Falling Stars, the Cleveland rock and roll band founded by Christopher W. Allen and Tim Parnin (Rosavelt, Cobra Verde, Sweet Apple). The album was recorded in North Carolina at Fidelitorium by Mitch Easter and produced by Don Dixon, the duo behind seminal pop albums Murmur and Reckoning.

Stranded in the Future was mastered at Sterling Sound by Greg Calbi, whose credits include Born to Run, Damn the Torpedoes and Blood on the Tracks.